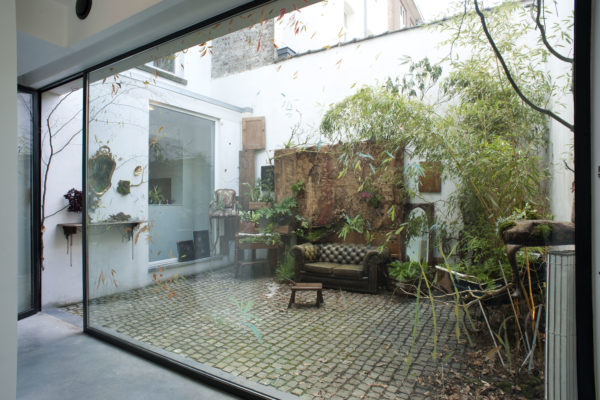 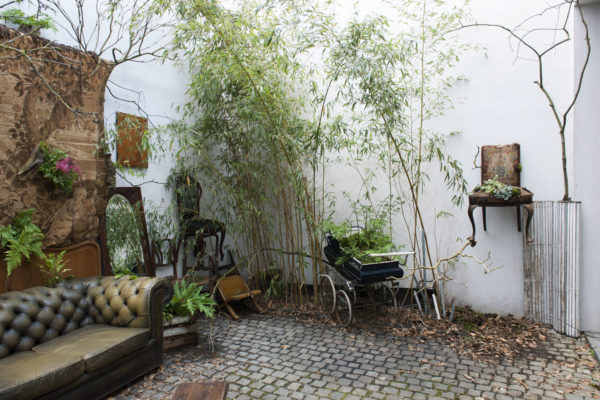 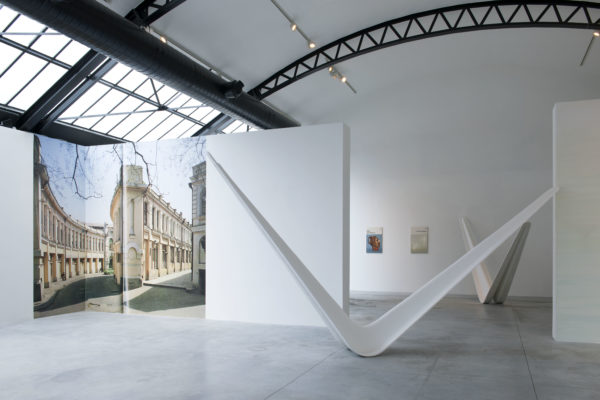 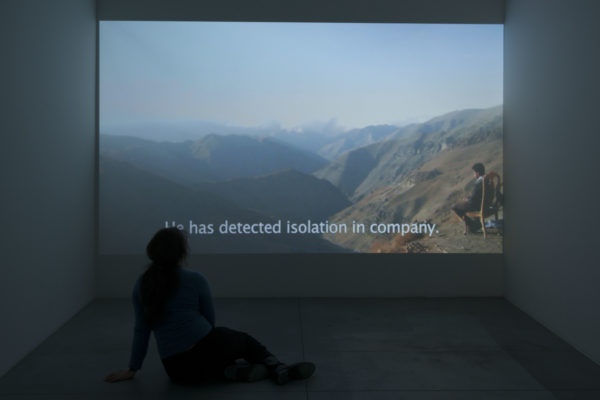 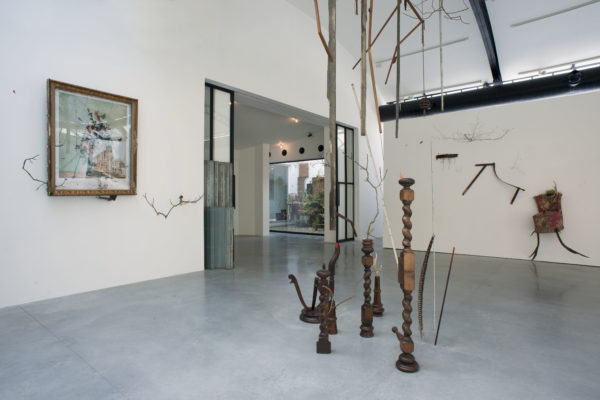 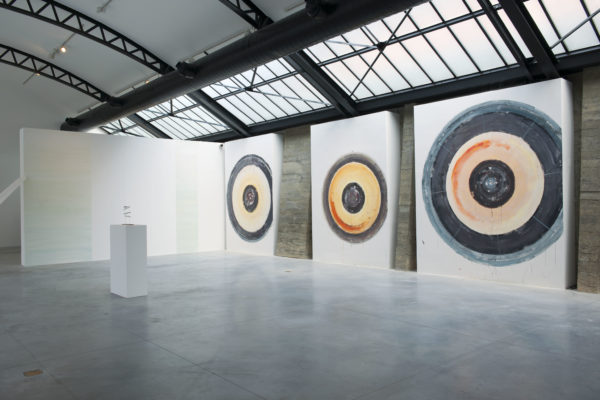 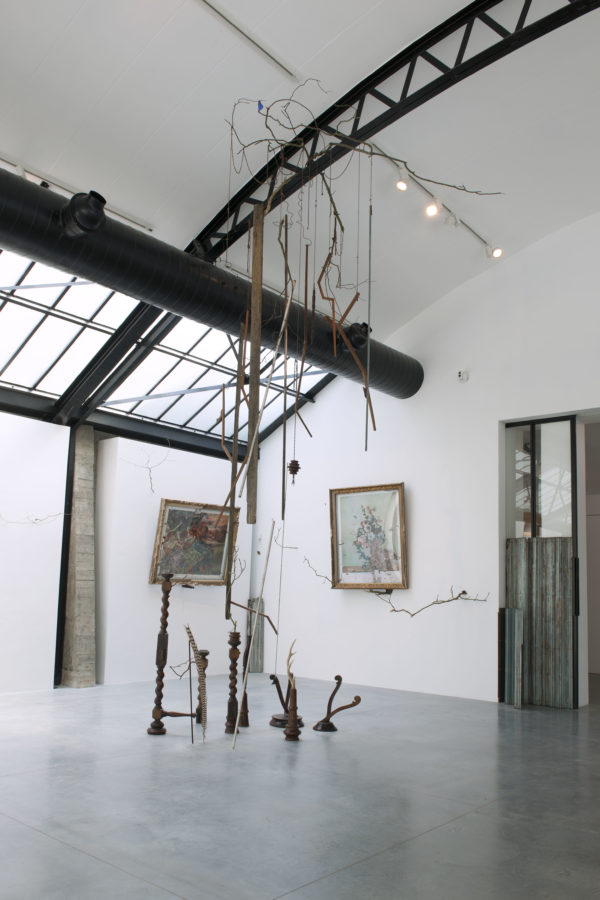 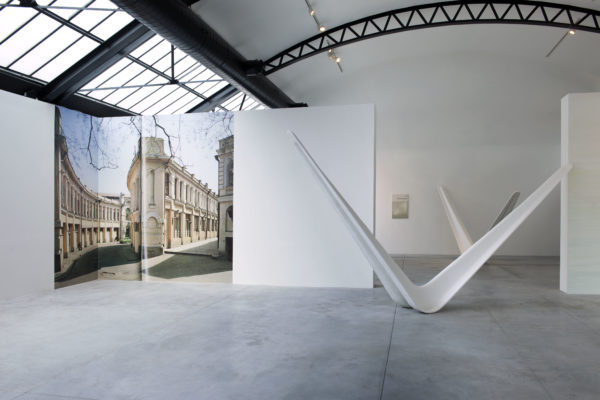 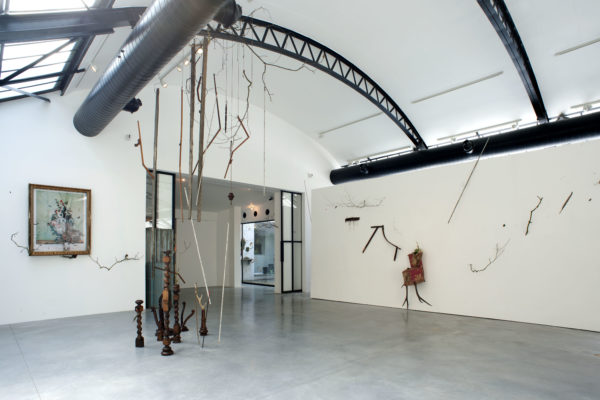 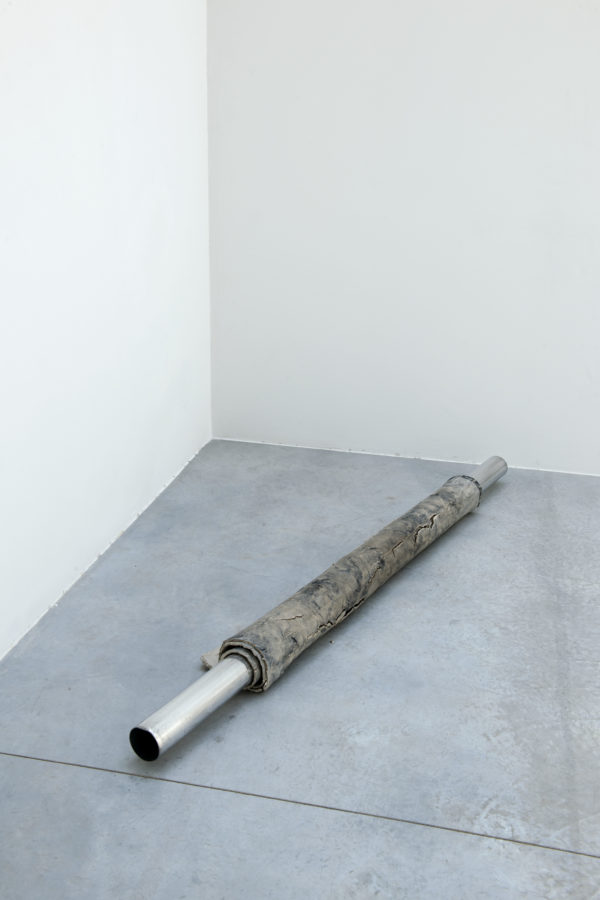 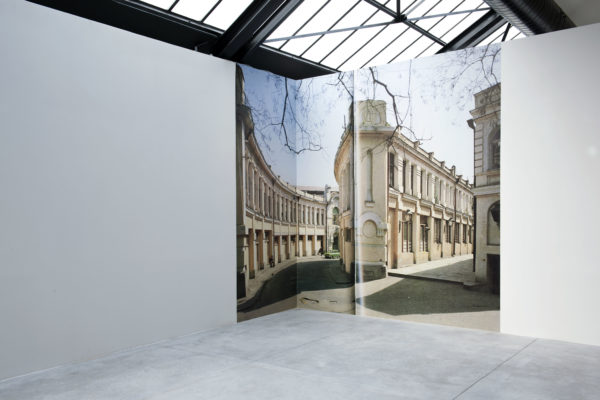 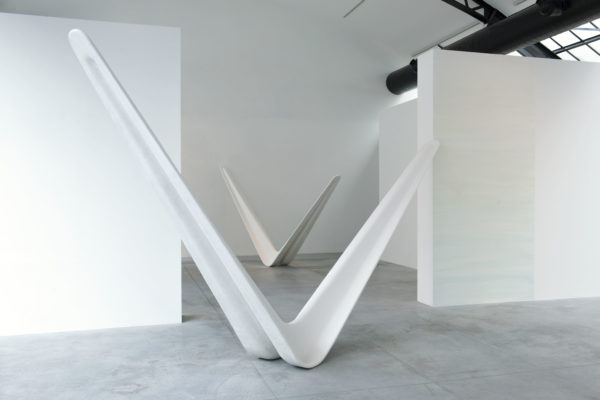 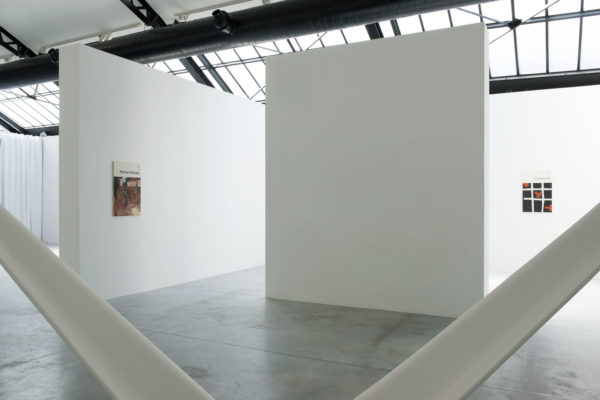 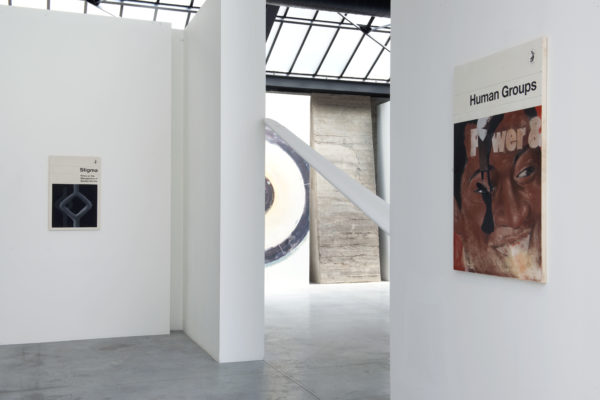 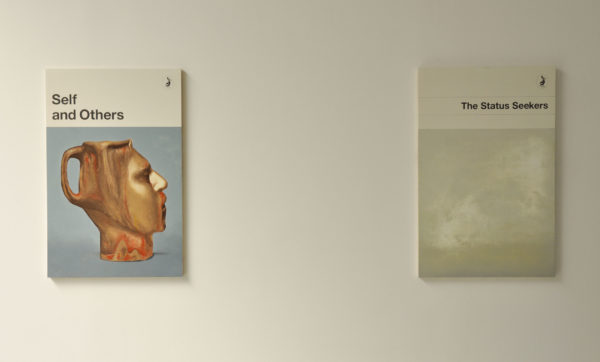 Over the course of 2013, eight Belgian and French collectors were invited by the CAB to each individually support a project led by an artist of their choice who is not represented by a gallery in Belgium. Each collector thus gave an emerging artist the opportunity to produce a project which they would otherwise have been unable to work on due to a lack of space or means. The result is an arrat of eight ambitious and impressive creations, each generously financed by a collector.

The ‘Out of character’ group exhibition is not a conventional, lateral display of artworks, nor does it seek to be a thematically driven exhibit. It is disjointed yet balanced.

Each artist was given the challenge of being mindful of the space provided while striving to endow their work with its own singular character. Each was offered the chance to express themselves through a work or composition which aimed to break the mould.

The original approaches included hints at journeys made afar. But also rare or precious mediums have been put to use in order to showcase artworks of exotic and odd proportions – to mention just a few practices.

This exhibition reveals the close affinity which may arise between collectors and artists. On this occasion, the link between artist and collector is brought down to a human level, with a stark distance taken from any bargaining and haggling inherent to commercial relations. The difference here is that the artwork sprouts from a full use of available resources as well as a true interaction, dialogue and exchange between collector and artist.

‘Out of character’ explores the artist’s patronage and the resulting relationship. As a private initiative the CAB seems to be the most appropriate environment to tackle this relevant subject. This exhibition pays attention to those collectors that try to redefine their position in today’s society. They outstep their conventional role, and directly intervene where necessary. The approach followed is not that of creatin a personal collection, but rather to raise awareness and respect for emerging artists’ work.

Bueno named his home and working space, located in Lapa in São Paulo, Mata Adentro (‘Jungle Inside’). The studio is an invitation inside this jungle, a symbol of the quest for self-knowledge and unveiling of the subconscious. It has become a living laboratory where nature and time are at ease with each other, a place where reclaimed materials, mostly wood and plants collected from urban waste, are transformed into installations, sculptures, paintings and objects that speak about the continuity of life. By rescuing natural materials, the artist draws attention to the organic medium and hints at frequent renovation of the environment, full of optimistic colours, geometry and figures while extracting fresh common references from an ancestral ground. His work unveils fundamental questions about universal issues. The intention of Rodrigo’s work is to allow space for a variety of senses, from touch to vision to sound or to better depict the silence that emerges from contemplation. Objects are transformed into magical tools for the viewer as keys to unleash our sensibilities to what surrounds us. 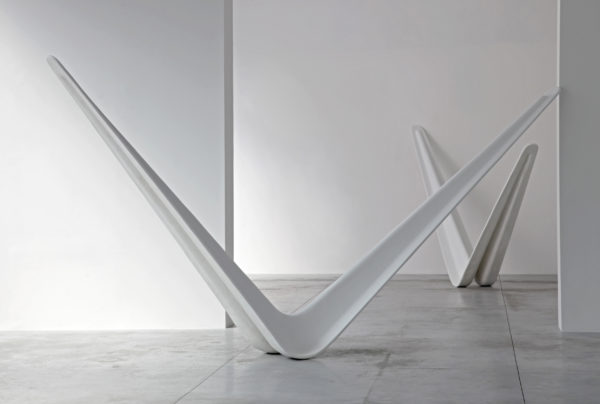 Casaer’s sculptures deal with the known. He does not create new images but ‘reworks’ found or remembered imagery. Forms that we come across on a daily basis are taken out of their context, scaled-down, enlarged and then translated into a new material. Clichés are re-evaluated. The sublime is put into perspective. Despite the playfulness and the light-heartedness of the sculptures, nostalgia and romanticism are also to be found. Our collective consciousness, the mass media, tradition and art history are important breeding grounds for these aspects. Through the ongoing process of adding and abstracting, forms are charged with meaning. There is a story here but it is implicit rather than explicit. The work of art is characterised by poetic undertones combined with simplification and a sober execution. Feelings do not lie like a veil over Casaer’s work. They are at one with the form. 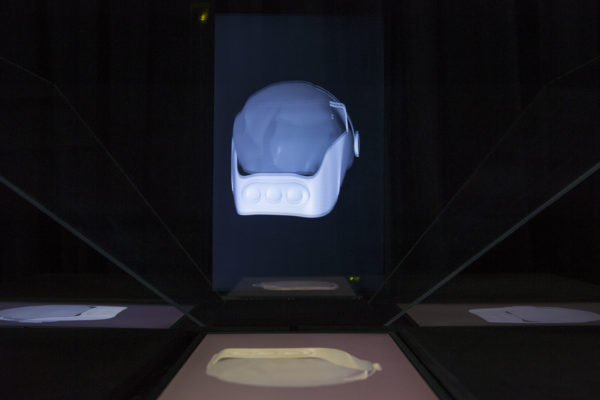 Clairenadiasimon, Something happened today. Can we have some time, more than a month? This is really just the beginning. I mean, we have fifty more years together and it’s getting better and better, and this is the worst time we’re in right now., 2014 Extract from « The future » by Miranda July Installation, variable dimensions

clairenadiasimon is not an artist’s collective but rather is an entity created through the dialogue between the artistic productions of Claire Andrzejczak (1984), Nadia Guerroui (1988) and Simon Asencio (1988). They present the results of their collaborative engagement, discarding the intellectual proprietorship of their work: “who made what?” is a moot question in their practice. clairenadiasimon’s work is born out of the specific situation in which it is displayed and viewed: the dialogue – whether in conflict or accord – that exists between the works; the mood that emerges from this exchange; and the cognitive effects on individual and collective viewership all determine how their work comes into being. The allusion to minimalist aesthetics and their use of prosaic materials such as paper, fabric, plastic, cement, or wood and simple technologies such as LEDs or holograms indicate an interest in the potential traces, however ephemeral, that crystallise for a viewer after the immediate and short-lived perception of objects. The subtlety of the materials remains only a means to this end. The reciprocity of subject-object relations, the gaze, and how objects can alter or be altered via different ways of perceiving is at the crux of this quest.
Julian Elias Bronner 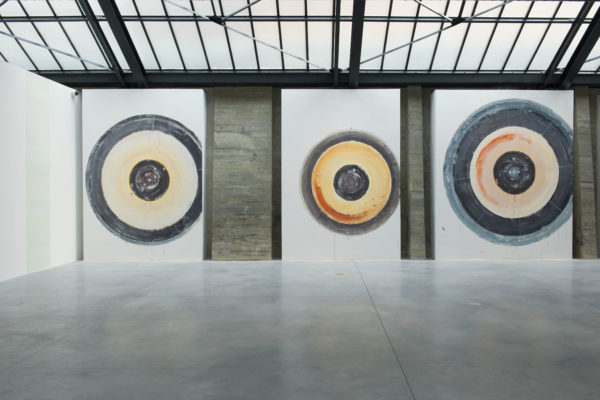 Engelen paints and sculpts because he feels an undeniable need to do so. He believes that this urge to create is necessary, as without it, creation has no value. In a way, he feels he had no choice but to become an artist. Because of his misunderstanding of the inner workings of machines, aircrafts etc., he appears to have developed a fascination for them, as well as a very personal and unique relationship with the ‘engineered reality’ which, in a way, sets up a fundamental duality towards these objects. This duality creates a mental conflict that is tangible in his work. His fascination with transforming fundamentally practical objects into an arbitrary entity is an important aspect of his work. One could say that he is reengineering the subject. It could be viewed rather like bringing the right explosives to the right place in a building that is being demolished. When the building tumbles down, the environment would then be saved and a new idea can take its place. He is reshaping existing subjects and searching for the untouched space that can still be explored. In a way, he believes that art in general has some sort of healing function.

Using the language of commerce, marketing and media representation, Gilissen offers a comment on the more cynical aspects of globalisation and consumer-driven politics. Through events, performances and installations, he explores the satires that, in his view, are a representation of the show business industry. As Dieter Roelstraete puts it in an early article about the artist’s oeuvre, « Gilissen’s work stands in a well-known but under-researched tradition of art that sarcastically celebrates the uncelebratable: a tradition that may be said to have begun with the famous case of the in-house string quartet stoically, even cheerfully playing on while the Titanic was busy sinking to the bottom of the ocean. A tradition that was brought back to life during the outrageous Monty Python-directed funeral of Graham Chapman, the Python who had played the leading roles in both The Life of Brian and Monty Python and the Holy Grail. A tradition that has thrived especially well in the ultra-cynical ‘post-politica’ era of globalisation ».

Sophie Giraux creates an image based on the physical nature of the subject. She explores different mediums such as sculpture, light, video and photography, for their pure sensory content brought back to a common level. She summons them for what they are – from within –. The artist models the substances so that, over a shared area, their essences come together, fade into each other and reveal their imprint by stuttering their own memory. Reality rarely makes its appearance as an image but manifest itself through the process that uses it, as a raw sensation, like a mould or like a memory. The artist brings the materials together in an environment in which they are plunged into specific temperatures, humidity or dry air levels against which paraffin, light, clay or coal are bent and moulded, sensitive as they are to the slightest of atmospheric changes. She thus evokes bodies in a state of transition, shifting, whose identities are not limited to defined contours but oscillate between different cycles of focus: from darkness to transparency, from a clear to blurred state, from dry to wet, offering us unstable forms, perspiring and yet parched in their perpetual search of equilibrium. 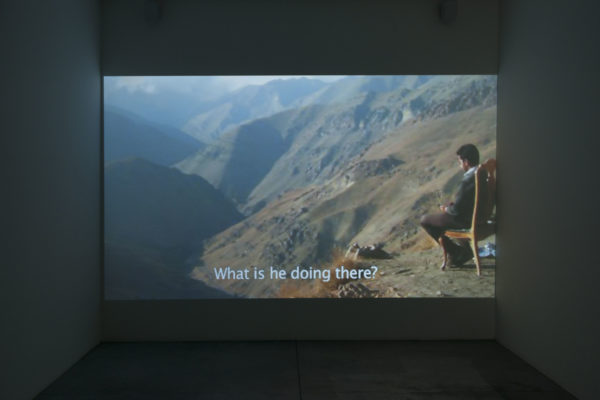 BORN 1985 IN TBILISI, GEORGIA – LIVES AND WORKS BETWEEN BRUSSELS AND GHENT

Her artistic practice involves of a variety of media, she particularly uses film, performance and photography in her installations. Her work is a dynamic discourse between audience and author, the notion of language, interpretation, writing and visual narration. The films that she creates deal with stories and personal and historical identity. They are permeated by an in-depth poetic experience. In her work, the analysis of the image – its creation, formation and display – is very evident. It contains an inherent sense of humour, a soft feeling of melancholia and at times complete absurdity, which reveals a specific sensibility towards image and narrative. The stories that appear in her work are self-written and recount an alienated tale somewhere between fiction and reality. She is thus able to create a universal novel enclosed in a single photographic image. Meggy Rustamova has a multifaceted approach to art rather than being the type of artist who focuses on one specific media or idea. 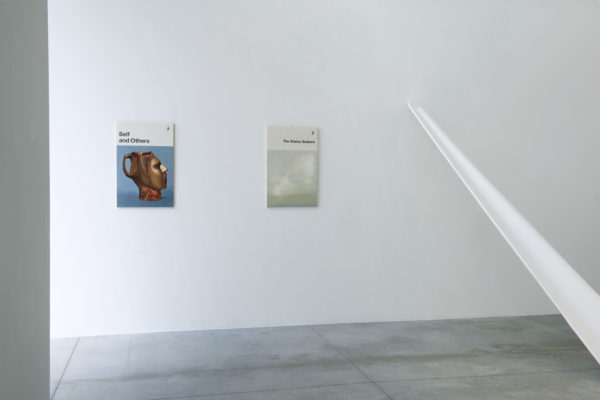 As a painter, d’Ursel slowly started feeling pigeon-holed into a position where style placed a restriction on his work, which used to put him in a place preventing him from experiencing other things around him. His working process radically changed when he made the decision to commit to the self and all the experiences emanating from it. This approach resulted in a journal of experiences employing all kinds of media materials as a means of documentation, ‘appropriation art’ so to speak. The journal deals with the idea of the fading of identity and collective memory. The appropriated images are cut up, reversed, relocated, etc. and put in a different context. He does not find them worthwhile for their informative content but rather for their representative potential as images. There is often a sense of déjà vu about them, a certain cliché that allows the image to be experienced in the most objective way. It must therefore be as free of context as possible. Most of his work is based on the dialogue between different elements. These elements include paintings, sculptures, photographs, text, etc. They are often presented as one piece containing multiple entities. Each different project does not necessarily lead to the next in a logical sequence.