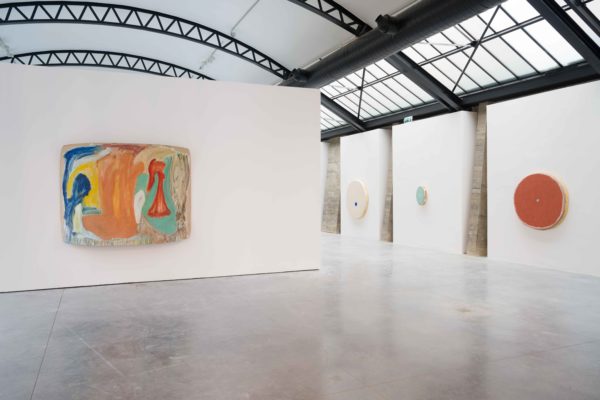 In the 1960s, at the height of minimalism, Ron Gorchov and Otis Jones hijacked the total purification of the object to inject the canvas with a newfound vitality. They shaped expressive spaces in which abstract forms – geometric at times, biomorphic at others – come alive though the rhythm of elementary colour palettes in combinations that never cease to surprise. The exhibition retraces the related journeys of two artists who have marked the turn of the 21st century with ever-evolving artistic practices that are striking in their consistency as they are in their porosity.

After moving to New York in the 1950s, Ron Gorchov (1930-2020) began to explore the tension of the convex/concave angle, as an act of resistance to the “ad hoc acceptance of the rectangle”. He built his first “saddle” frame in 1967, and over the course of his career presented innumerable variations of this curved structure delicately tilted towards the viewer. As he was striving to “create a new kind of visual space”, Gorchov’s practice became heavily influenced by both Joan Miró’s surrealism, and Mark Rothko’s colour field painting. His work inspired a generation of artists who sought to revitalise the medium of painting and to imagine new ways of approaching the pictorial plane. One of these artists was Otis Jones (°1946), whose reductionist canvases are displayed in dialogue with Gorchov’s enigmatic and visceral works. Whether hung individually or stacked to form free-standing columns or portals, Gorchov’s “saddles”, much like the wooden structures that underlie Jones’ canvases, resemble shields or totems that transcend the flat surface of the wall. Jones’ iconic stacked structures echo shapes and forms found on construction sites, where he collected scraps of wood which he assembled intuitively, rather than through a calculated process. As his practice was evolving, he would later make frames with rounded and irregular edges from which he hung drumskin-like fabric, borrowing as much from the techniques of some of the African masks he collected as from the simplicity of his beloved Bauhaus.

Gorchov and Jones radically opposed the concept of “perfection” in art that reigned at the time, and didn’t hesitate to render the creative process visible and tangible in works that assimilate accident and chance. With Gorchov, the process breathes through accidental drips of paint, as well as on the canvas’ bare edges where frontal staples meet resolute brush strokes. In search of “tension, a strangeness that develops organically,” Jones reveals the textural thickness of the paint by playing with the accumulation and erasure of layers of colour. Forms are reduced to their essence, the painting becomes a vestige. The glue which holds the wooden plates together recalls the horizontal position of the work table, further elaborated with a tactile and artisanal dimension exacerbated by an excessive amount of staples that frenetically delineate the contours of the canvases. This emphasis on the making of an image feeds the physicality that emanates from the language of the two artists. “Painting is about the surface,” Gorchov recalls. It is therefore from the canvas that colour, forms and volumes are intermingled in a whole that is both harmonious and dissonant.