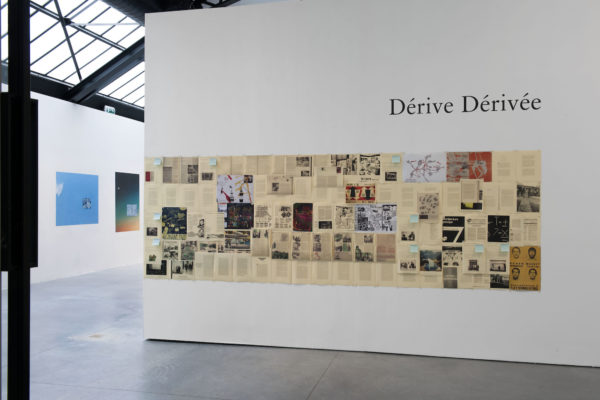 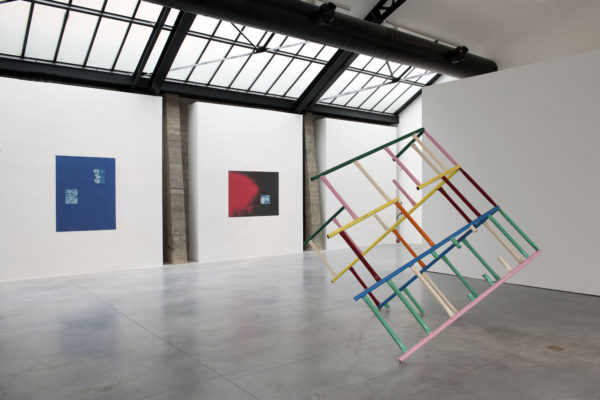 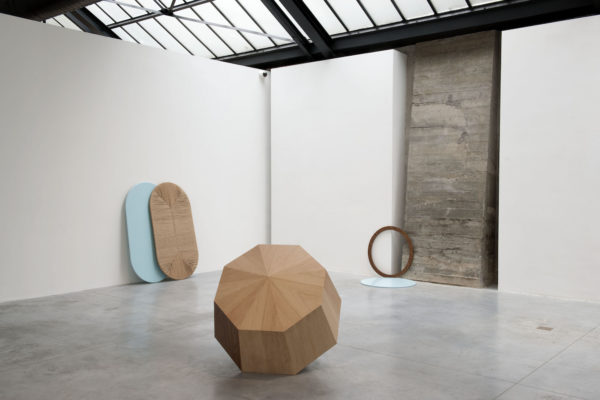 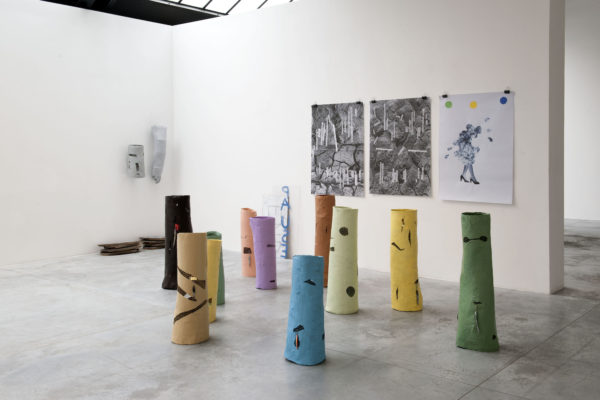 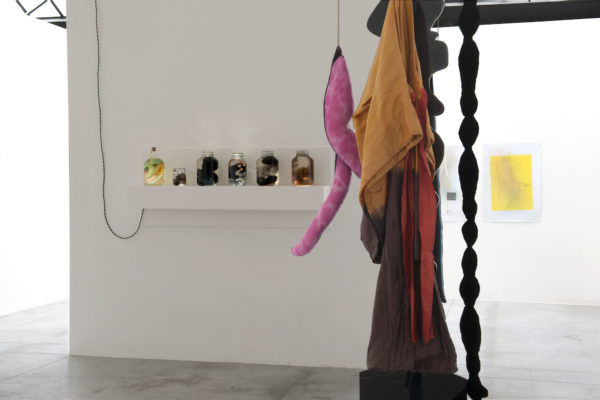 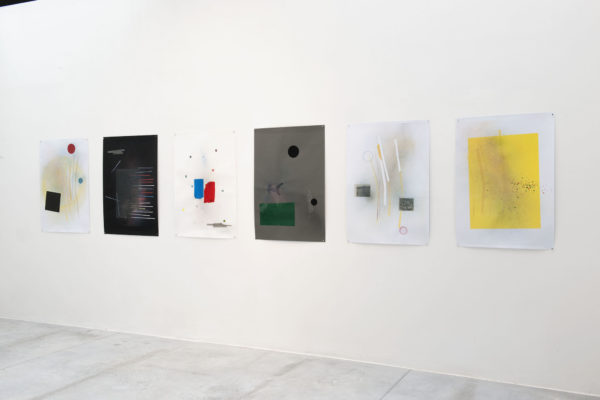 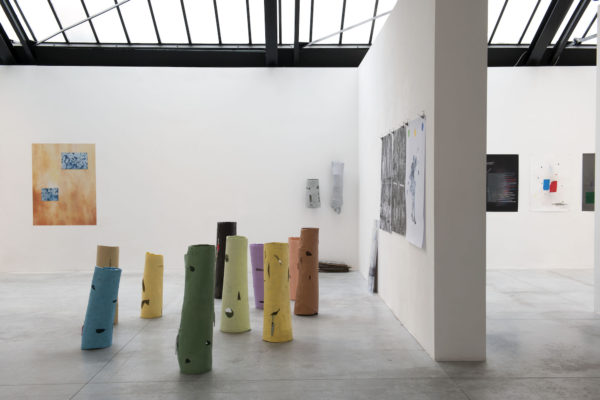 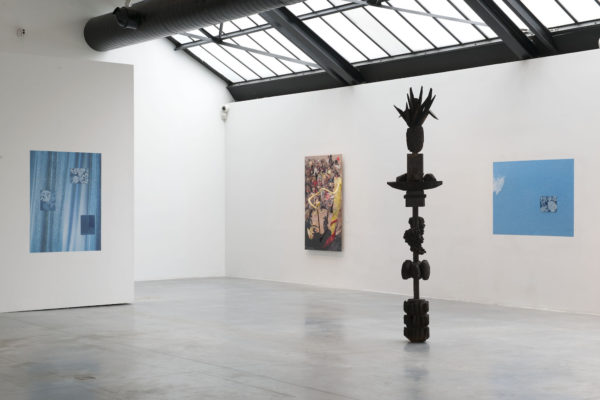 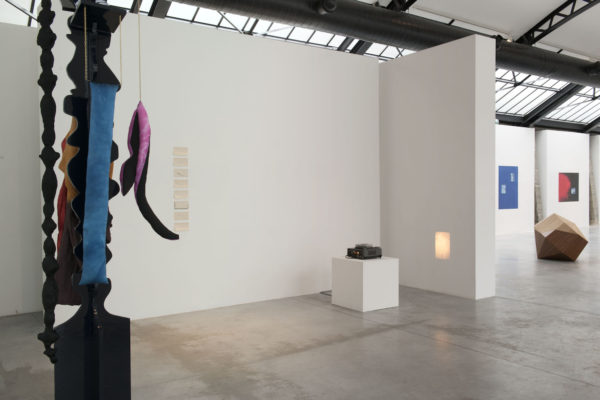 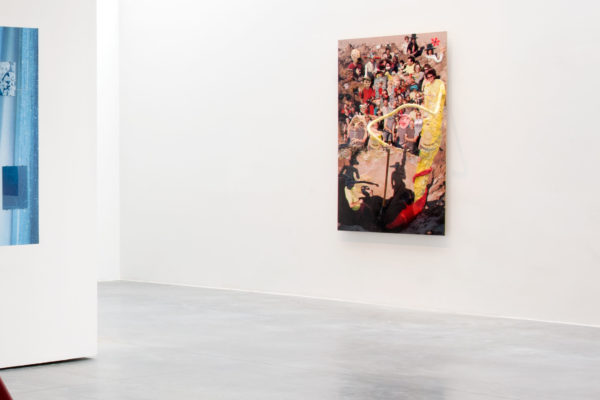 The exhibition explores the glorification of communal movements in art and architecture during the fifties and sixties.

These movements emerged from a time torn between the promising ideas of modernity and the intense demand to critically question these principles. While their work first and foremost aimed to merely witness the world they were living in. Their ideas and ideals, for example, of communal living, artistic collaboration and playfulness have for the most part faded away in our individual-centered and sober contemporary lives. Nevertheless the nostalgia and admiration with which we look back at this sort of cultural, artistic and architectural projects is perhaps a testimony to the utopian ideals of community, sociability and equality that continues to inspire and drive many artists, architects and thinkers.

B. 1980 Vancouver, Canada; lives and works in Berlin, Germany.

Coming from a dance and design background, Michele di Menna activates colorful and playful Installations, creates sculptures out of paper maché, and presents texts, collages, and music in performances. Her installations tend to change over time and are specific to the architectural spaces of their presentation. She regularly incorporates other performers to work with her and to invent different set-ups or assemblages of her sculptures. The performers receive instructions from the artist and they collectively unfold a story throughout the duration of the performance. For Dérive Dérivée, Di Menna presents her ongoing work comprised of transducers—devices that convert energy or a signal from one form to another—which will change over time in the space. On November 12th, Di Menna will perform at CAB to create yet a different version of the current installation. 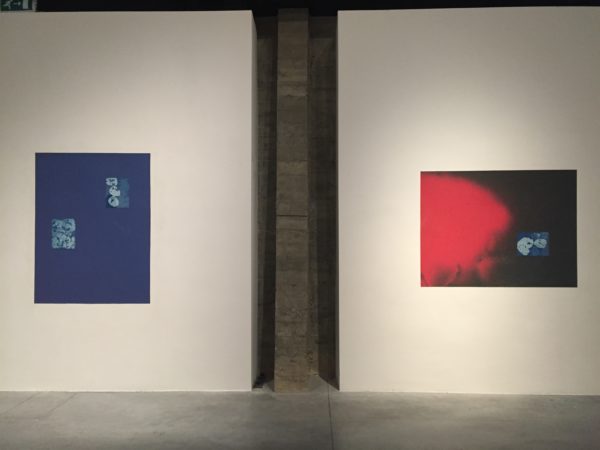 Sunah Choi works with photography, as well as sculpture, video, and installation. Her work deals with the notion of chance and is engaged in debates around cultural appropriation. Choi has experimented with cyanotypes (an image-making technique whereby ultraviolet light leaves pale shadows on photosensitive paper) to allude to the Surrealist photograms as well as the scientific practice of British botanist Anna Atkins who used this method first to document her specimens from as early as1843. The artist brings together different histories and ideas behind the technique to create something new. With a nod to Adkins, Choi makes cyanotypes with leaves she finds around the city, cracked and eaten in parts by insects, while she is drifting in a state of dérive akin to that of the Situationists’ wanderings. The images she creates are always a surprise, as they are the product of chance-encounters. In a new experiment, Choi has created a wallpaper from inkjet prints based on her photographs of enlarged advertisements depicting urban skylines. This functions as a backdrop as well as a reproducible digital image in contrast to the unique handcrafted cyanotype prints. 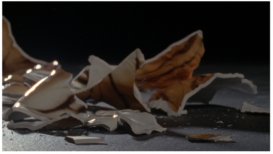 Beatrice Gibson works mainly with film, performance, and text. Her practice explores ideas on sound, sociality, and collective production within a given space and the problems of representation. The Tiger’s Mind (2012) is an abstract crime thriller set against the backdrop of a Brutalist villa. Six characters—Tiger, Mind, Tree, Wind, Circle, and a girl named Amy (standing in for the set, music, sounds, special effects, director, and narration respectively)—battle one another for control over the film. Her work intends to bring all these characters involved in the making of the film to the same level of engagement. 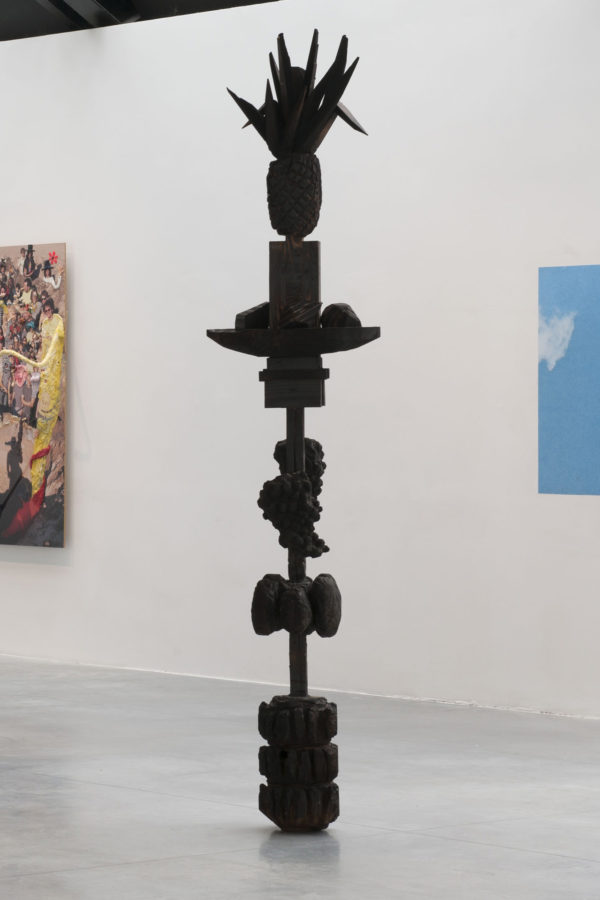 Mathias Prenen’s sculptures and installations can be described as a battle between abstraction and representation. Prenen is interested in different ways of sculpting in wood, from old-fashioned techniques such as chiseling to more modern methods, including working with a chainsaw. For Dérive Dérivée, he presents two totem-like figures “#BALUSTER#SEISHONAGON” and “#BALUSTER#CarmenMiranda”, for which he has combined the 15th century idea of the baluster ornament from a Western architectural tradition with different types of cultural performances from various parts of the world. The titles refer to such cultural mash-ups—Carmen Miranda being a famous Brazilian samba dancer from the 1950s, and Sei Shōnagon being the first female writer of the 11th century Heian period Japan. He draws links to Situatiationism in his works and considers how these performers are in a way being robbed of the essence of their culture by the mass media, the burden of modernism, and the culture of spectacles. For him, every form is a kind of artificiality that we should embrace to overcome it in a subversive way. 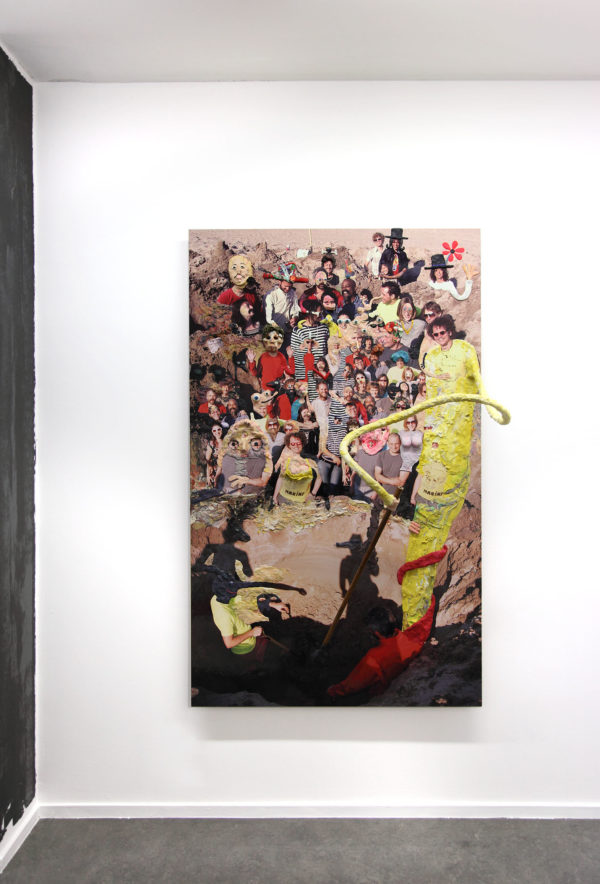 Gelitin is a collective of four artists Wolfgang Gantner, Ali Janka, Florian Reither, and Tobias Urban. They first met in 1978 when they all attended a summer camp and ever since, they have been playing and working together. Their sculptures, installations, paintings, drawings, and performances are always a balance of playful sometimes childlike elements with more provocative components. In Dérive Dérivée, they present “Reine Magarine Rilke Jean Jacques” (2013), specimen jars containing the preserved remains of plush animals, and “Voulez vous dick cunt“ (2011), a collage photograph of a crowd of people onto which they have added dabs of plasticine.

The sculptures and installations of Kato Six derive from her memories of architectural and design objects. She translates these memories into visual forms that are often geometric and detached from their original context, to be placed instead in an exhibition space. Her objects do not have a function but always resonate a sense of tactility. For Dérive Dérivée, she created “Objects can be many”. This new installation is comprised of a few different elements, including a large oblong cut-out with the surface image of woven jute, a top-like wooden octagonal object, and a circular cut-out covered in pale blue varnish that evokes her memories of bathrooms from the 1980s. The form, dimensions, and materials of these objects do not necessarily correspond to what they reference in reality. She plays with materials connoting a certain value, such as faux and cheap variants as well as ones that look more expensive, and creates a striking contrast between craftsmanship—making these objects takes the time—and industrial manufacture.

Christoph Meier’s minimalist sculptures, drawings, spatial interventions, and video installations playfully explore the border between the everyday, recognizable scenes and autonomous sculptural objects. Meier presents “2/3/3/6” (2011), a work created in collaboration with Sunah Choi while they were living in Vienna and Berlin respectively. Aside from the pre-determined size of the paper, no stipulations were made as to the method of working or the materials used. After each artist had worked on a given piece of paper, it was mailed to the other person, who would then continue to work on that same sheet of paper. The process was repeated three times for three individual pieces of paper, resulting in six different works of art. 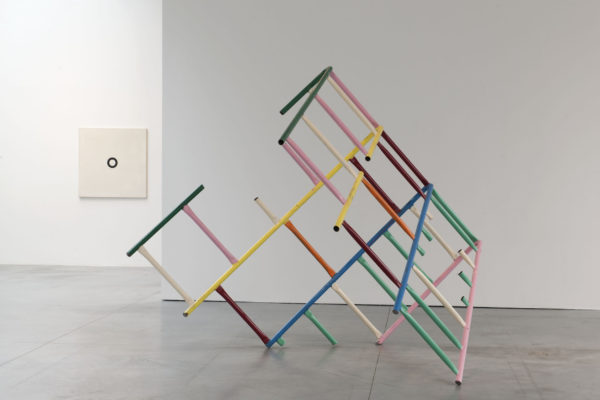 Architecture, in particular, from post-war era Eastern Europe, is an important reference point in all of Przemek Pyszczek’s installations, sculptures, and paintings. He combines elements from his own childhood memory of such architectural spaces with contemporary realities of the immigrant experience. The series Playground Structure (2015) is comprised of old photographs of playgrounds built by metal workers in Poland, which the artist reconstructs by ripping apart and putting back together parts of the photographs and painting them with candy colors. 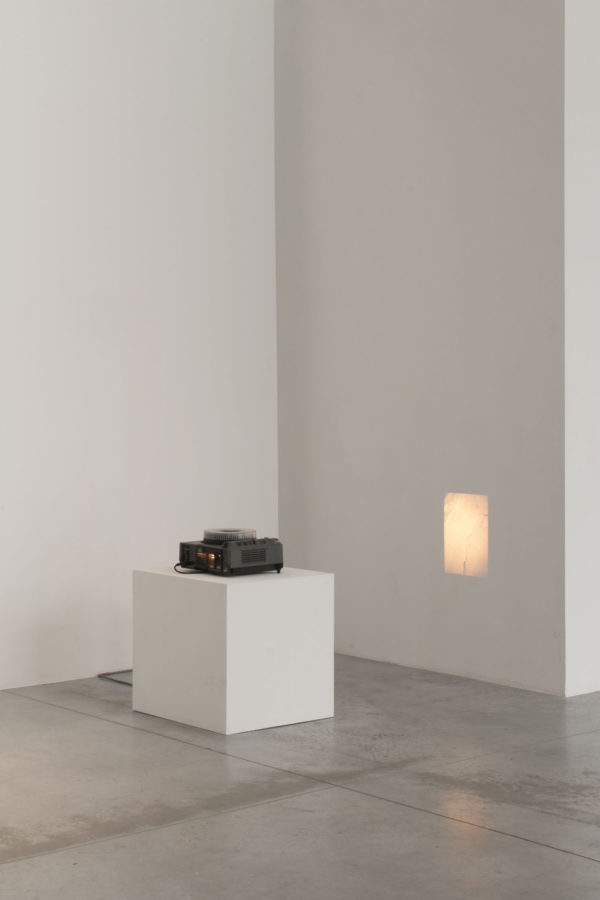 Runo Lagomarsino works in a number of different media, including video, drawing, sculpture, and photography. Through his unique poetic and aesthetic language, Lagomarsino seeks to present alternative perspectives on history and political or cultural power relationships between the global North and the South. Lagomarsino presents “ContraTiempos” (2010-2011), which takes as its starting point Parque Ibirapuera. This urban park in São Paulo is designed by Oscar Niemeyer and Roberto Burle Marx in 1954 to celebrate the 400th anniversary of the city. A slide-projection shows images from the artist’s search of the area, during which he sees maps of South-America in the cracks of the urban pavement. These images are reflective of the artist’s memory of the contours of the territory.