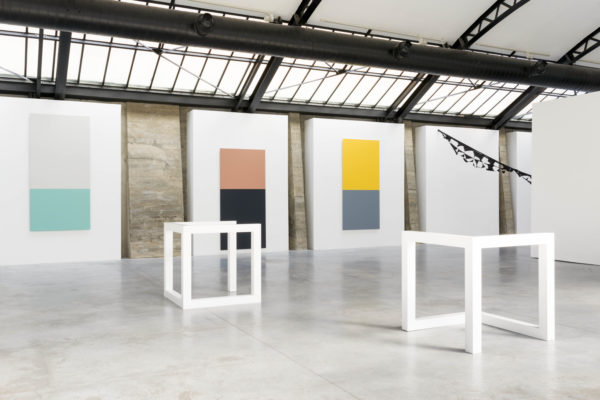 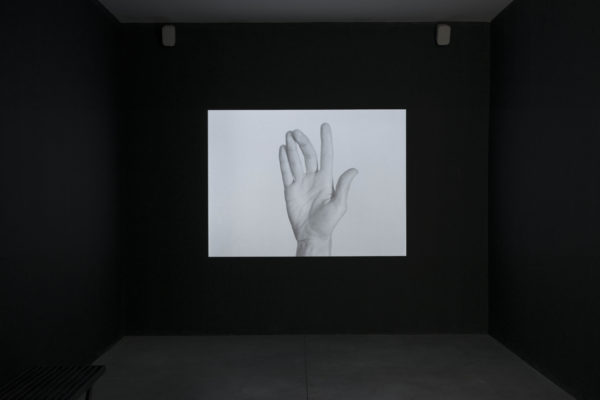 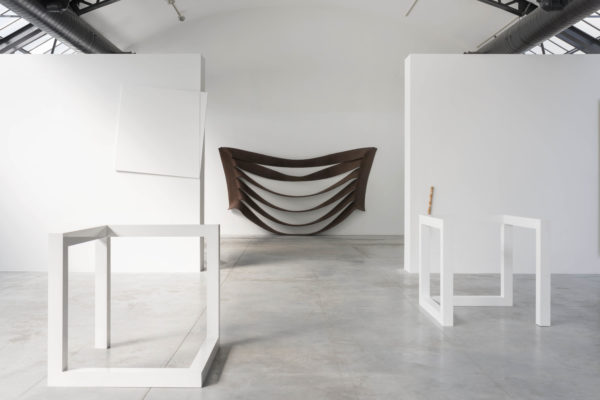 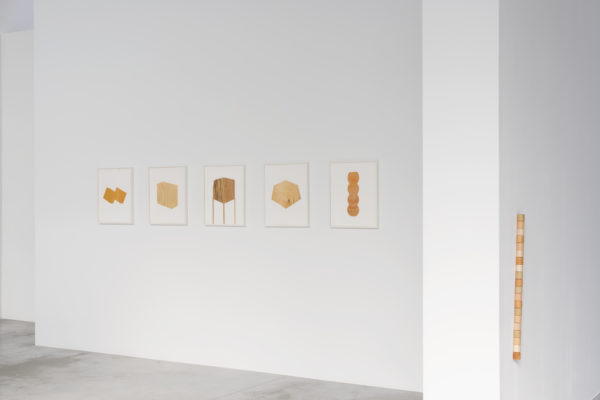 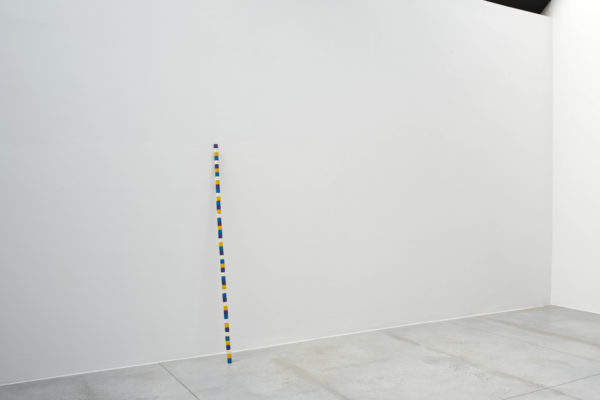 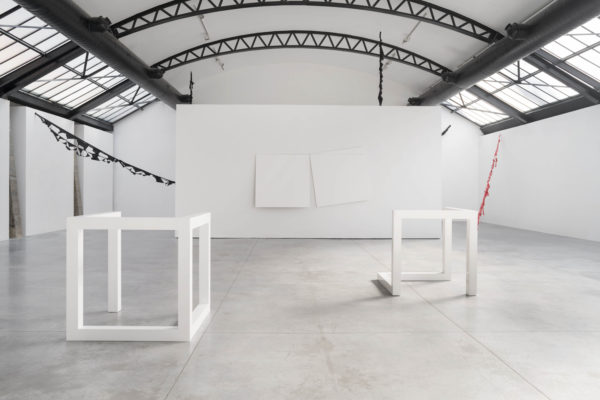 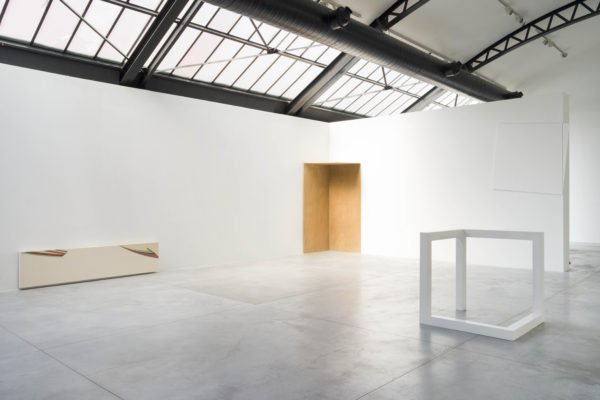 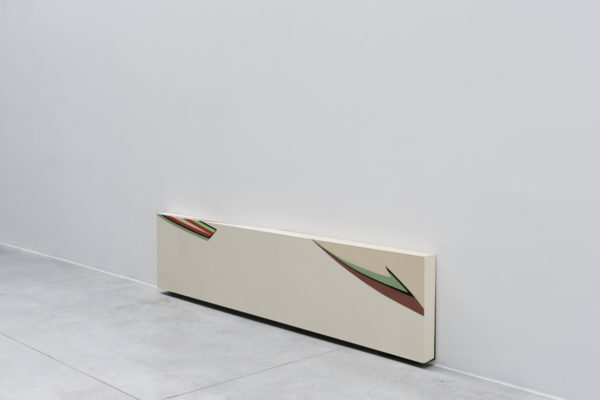 The group exhibition Structures of Radical Will examines the notion of physicality at play in forms and practices associated with minimal art.

The focus of the show lies in the sensory experiences offered by artworks that strongly rely on the activation of the space and time in which they are presented. From the conception to the reception of the art selected, the perceiving body plays a central role, yet remains mostly absent from representation. Through a ceaseless back and forth between apprehension and cognition, Structures of Radical Will ambitions to also shed light anew onto the critical and political scope of a formal vocabulary and attitude that have by now fully entered the dominating artistic canons.

The title of the show takes its origin in the combination of two historical references. On one hand, Primary Structures, the exhibition held at the Jewish Museum in New York in 1966, introducing then pionniers of so called minimal sculpture. On the other hand, Styles of Radical Will, Susan Sontag’s second collection of essays published in 1969, dedicated to various contemporary art forms and the states of consciousness they may convey and produce. Alongside works by historical figures from the 1960s and 1970s, Structures of Radical Will, in its turn, features recent productions by lesser known or younger artists, gathering hence together for the first time Jo Baer, Béatrice Balcou, Marion Baruch, stanley brouwn, André Cadere, Kapwani Kiwanga, Sol LeWitt, François Morellet, Robert Morris, and Yvonne Rainer.

Conceived by guest curator Béatrice Gross for the two venues of Fondation CAB, Structures of Radical Will unfolds organically between its main section in Brussels and its extension in Saint-Paul de Vence. Displaying different yet closely related artworks, the two chapters of the exhibition create thus a symbolic bridge between the two sites of the institution.

It is indeed the fundamental co-presence with the artwork and the circulation of gazes and images that Béatrice Balcou (n. 1976, Tréguier, France) stages with sobriety and aptness. Since 2013, the series of performances Cérémonies sans titre (Untitled Ceremonies) have consisted of silently revealing the artwork by artists other than herself. From this performative corpus are born the works called “placebo”. Originally conceived as training tools for the ceremonies, these wooden replicas of the source pieces have become artworks in their own right. Accompanied by their Impressions, mysterious photographic prints, the Placebos complete their attention-seeking endeavor. Through this triple trigger device, the artist questions the entire contemporary system of exhibition and reception of art, for which she proposes to revitalise the experience.

The question of the sensorial perception of painting resides at the heart of Jo Baer (b. 1929, Seattle, Wash, USA) preoccupations. Trained not only in drawing and painting but also in biology, Gestalt psychology, and phenomenology, Baer explores the perceptive qualities of fundamental pictorial elements and their interaction: support, shape and, color on a monochrome background. With a series started in 1970 of volume paintings hung as close as possible to the ground, Baer accomplishes according to her expression a sort of “sleight of hand”: by running the colored curves beyond the frontal surface of the canvas to its side planes, the artists presents an unprecedented pictorial creation projecting both relief and movement.

Recently rediscovered artist whose production since the 1950s ranges from painting, sculpture, installation art, to performance and collective creation, Marion Baruch (b.1929, Timișoara, Romania) operates at the age of 80 in a new creative direction. Since 2009, she has developed an interest in fabric scraps emanating from the textile industry. Against overconsumption and the excessive use of resources, Baruch builds a supple and variable geometry of revalorization. The found materials are selected with care; most often monochrome, always flexible, they are then simply hung on the wall or suspended from the ceiling. Some of the installations are sprawling: Trajectoires (Trajectories) structure as much as they obstruct the space that welcomes them, offer-ing through a play between voids and solids, a course of accidental beauty. 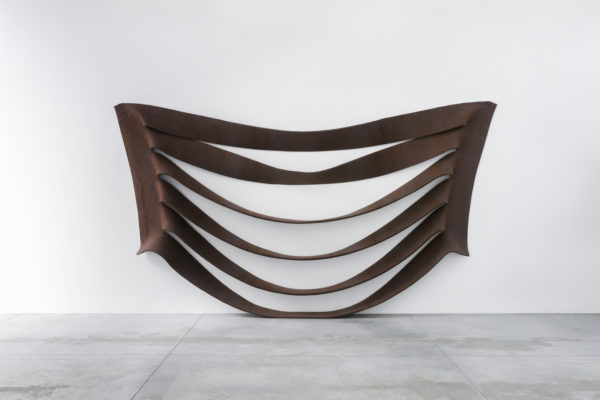 The contingencies of the material, its malleability especially, lie at the heart of Robert Morris‘ (b. 1931, Kansas City, MO, USA – d. 2018, Kingston, NY, USA) Felt Pieces . Started in 1967, this major body of work by the multidisciplinary American artist embodies the decisive notions of process and anti-form discussed in his writings. Large sections of industrial felt are cut following simple ge-ometric patterns to find their definitive shapes only once fixed onto the wall. It is under the effect of gravity and the exact circumstances of the hanging that the soft, yet rigid artwork fully comes into being. Actively sought out by the artist, this act of collapsing allows the monumental pieces – that one guesses heavy and almost as if alive in the movement they evoke – to unfold completely in the space of their presentation. 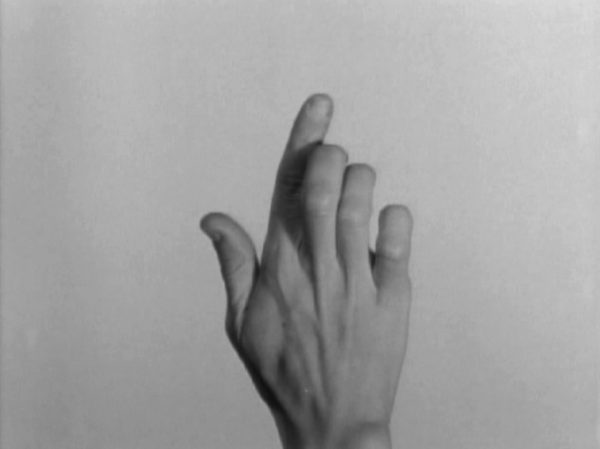 Yvonne Rainer, Hand Movie, 1966, Image courtesy of the Video Data Bank at the School of the Art Institute of Chicago, vdb.org

In Hand Movie (1966), the movement observed with sharpness and precision is that of a fragmented and de-individualized body. First short film by the choreographer and dancer Yvonne Rainer (b.1934, San Francisco, Calif. USA) (co-founder of the Judson Church Theater to which Robert Morris also belonged), this fixed close-up shows the choreography of a hand (in fact the one of the artist when bedridden, during a recovery) shot against a uniform and neutral background. Performing a series of simple movements, the palm turns over and around, the fingers spread out, come together and rub against each other. The combinations become more complex as the film progresses, all the while staying true to the principles stated in Rainers’ No Manifesto (1965): “No to spectacle. No to virtuosity.” 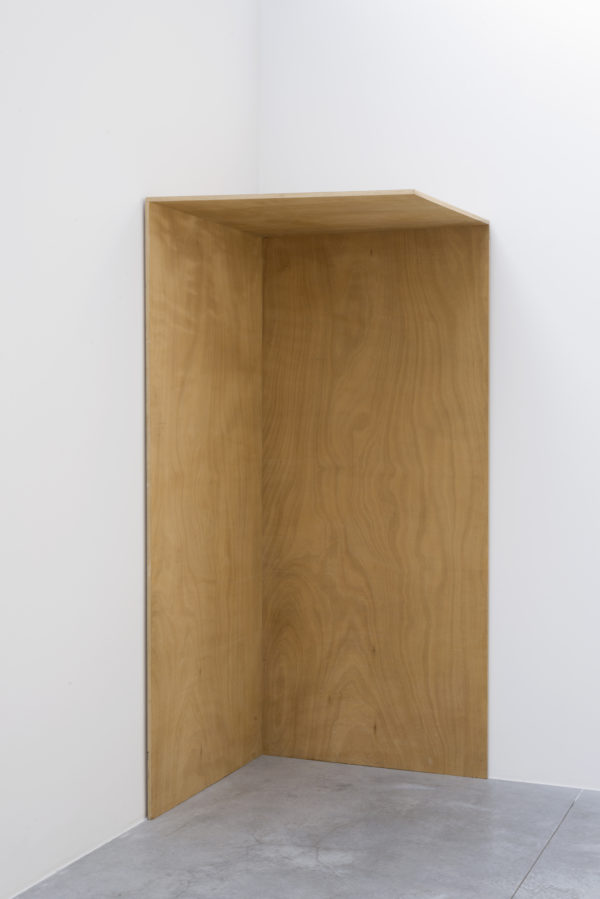 Stanley Brouwn (b. 1935, Paramaribo, Suriname – d. 2017, Amsterdam, Netherlands), is concerned by the awareness of space and the bodies that roam within it. A central figure of the first generation of European conceptual artists, brouwn led from 1957 onwards a rigorous and demanding exploration of reality as a concrete and measurable the experience. To do this, he adopts a radical position of subjective retreat: the artist refuses all iconographic, critical or biographical mediation of his work. For only the encounter of the work in the here and the now of the exhibition matters, architectural context included: a wooden structure, a sort of open cabin, underlines here the corner of a wall, there the constituent materials of a wall space are designated by a pencil drawing and a simple label. 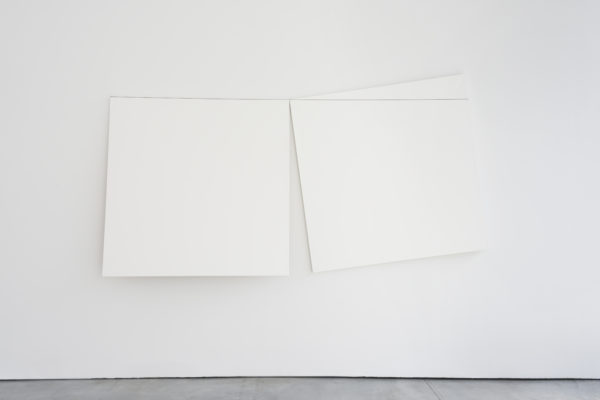 The criticism of the conventions of the concrete exhibition space and of an ungrounded autonomy of the work comes to life in François Morellet‘s (b. 1926 – d.2016, Cholet, France) work with the adhesive grids that leave the confines of the painting or when he creates “paintings in situation”. “Vacant at last, (they) began living lives of their own, liberating themselves from the dictatorship of unconditional parallelism with the wall and the floor. It is true, this liberty stops quickly, either in the front of the diktat of a final errant straight line, or, as always, in front of rigorous, simple, obvious, precise, and absurd systems”. Quasi monochromes are positioned in unusual ways – over the edge of the wall, at an unwonted angle, playing against the orthogonal norm. Thus, the iconoclast artist stages the collision between two logical systems, that of the presentation and that of the representation of the artwork. 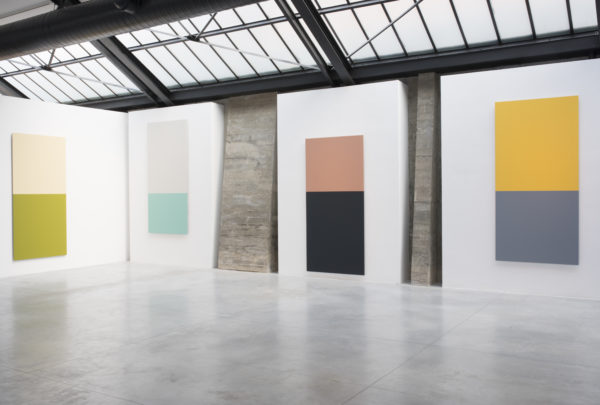 The resolutely flat, executed in smooth à-plats bichromes of Linear Paintings by Kapwani Kiwanga (b. 1978, Hamilton, Canada) refer to attempts at the controlling of bodies. Adopting a palette of hues designed for behavior modification purposes – whether of workers, patients or stu-dents, Kiwanga continues her reflection on disciplinary architecture and its strategies of physiolog-ical or psychological influence. The artist thus bases her chromatic scale on color theories from the reformist hygiene movement of the early 20th century. She then takes as reference specific places and concrete institutional structures (schools, prisons, hospitals) metaphorically referring with the horizontal delimitations of each of her paintings to the division in social groups and their hierarchy.

Through a provocative pictorial-performative practice, André Cadere (b. 1934, Warsaw, Po-land — d. 1978, Paris, France) points towards traditional institutions of art also as places of possible domination and repression. Contesting the usual methods of visibility of artworks and the power relations that result from them, this nomadic and protesting artist never ceased from 1970 onwards to infiltrate openings in galleries and museums, a round bar of wood in hand. These essentially ex situ artworks embody above all what the artists called an “unlimited painting”, whose cylindrical segments follow a system of mathematical permutation that an error each time voluntarily disturbs. Aspect even more decisive, adds Cadere: “three-dimensional object of variable dimensions, the round bar of wood has neither top nor bottom, neither front nor back, neither beginning nor end”. 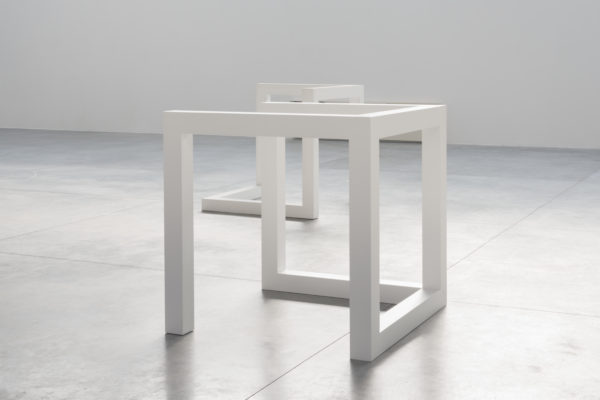 Perhaps surprisingly at first glance, Sol LeWitt (b. 1928, Hardford, Conn. USA, d. 2007, New-York, NY, USA)’s permutation systems are also based on an acting body. In his case, it is not about a potential manipulation, but rather a sublimation of the decomposition of movement accomplished by Eadweard Muybridge. From this chrono-photography published in Animal Locomotion (1887) – that the pioneer of conceptual art discovers at the start of the 1950s, LeWitt retains the methodical deployment of an investigative narrative logic; his geometric variations are therefore to be grasped like so many “narratives of shapes”. And to the movement of the unrepresented body from this genesis in absentia responds the one in action of the embodied and mobile gaze that navigates between 2 of the 122 ways imagined by LeWitt of not building a complete cube.